What is Periodontal Disease?

Periodontal disease is the term used to describe a group of conditions affecting the gums and supporting structures of the teeth. These conditions include Gingivitis and Periodontitis.

Gingivitis is a mild form of periodontal disease. It causes the gums to become red, swollen, and bleed easily. There is usually little or no discomfort at this stage. Gingivitis is often caused by inadequate oral hygiene.

Gingivitis does not include any loss of the bone or tissues that hold your teeth in place. It is reversible with professional treatment and good oral home care. If left untreated, however, Gingivitis may progress to become one of the destructive forms of periodontal disease (Periodontitis).

Periodontitis is a common, but more severe form of gum disease. It affects the gums and also the bone and tissues that hold the teeth in place.

The ultimate cause of Periodontitis is dental plaque. This is a sticky, white or pale yellow film, which contains bacteria and constantly builds up on your teeth. Dental plaque can accumulate both above and below the gum line. It can also harden into a rough, porous substance known as calculus (or tartar).

The bacteria within dental plaque produce toxins. These toxins can cause the gums to become inflamed, swollen and bleed easily. These signs are the body’s response to the irritating bacteria.

Although part of the body’s defense system, this inflammatory response can eventually cause more serious damage. Bacteria accumulating below the gum line can cause the gums to loosen around the teeth, resulting in a space between the gum and the tooth (a periodontal pocket). Infections may develop within the periodontal pocket. Over time, toxins produced by bacteria below the gum line can destroy the bone and tissues that hold the teeth in place. This destructive process may result in only very mild symptoms and there is often no pain until the disease has reached an advanced stage. Eventually, the teeth can become loose and may need to be removed. 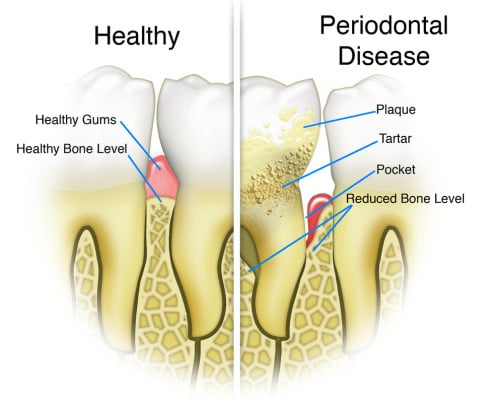 Why Do I Have Periodontal Disease?

The ultimate cause of periodontal disease is dental plaque that has accumulated above and below the gum line and your level of oral home care plays an important role. However, some people are more susceptible to periodontal disease and this may be due to:

The immune system is largely determined by your genes. Therefore, periodontal disease often runs in families. There are other factors that may also alter your immune response and make you more susceptible to periodontal disease. These factors include:

These factors play an important role and quitting smoking or controlling blood sugar levels may reduce your susceptibility to periodontal disease. However, the ultimate cause of periodontal disease is the bacteria in dental plaque. Therefore, our goal is to prevent the disease progression by removing the dental plaque. This is achieved by the treatment performed by your Periodontist, long-term professional maintenance care and good oral home care.

If you have any questions or would like an opinion about gum disease, gingivitis or periodontitis, please feel free to contact us.

Alternatively, call 03 9853 7700 directly to speak with one of our friendly treatment co-ordinators, or to request an appointment with a gum disease specialist.